I am starting to beat back the winter blues and feeling the need to either post or get rid of the blog, so here I am.
It has been a tough month since I last posted. A good friend of mine died of heart disease at 34, yes, 34. It is crazy. It was especially painful since he is a mutual friend of the ex and I and I felt pushed out. I was made to feel, my feelings didn't count. I was slammed during the week of the funeral about who I could and couldn't talk to, and who had my best interests. I'm pretty sure it wasn't my ex by the way he was acting. After sitting for 3 hours of a celebration of life, I followed up the ride home by giving myself alcohol poisoning and ending the weekend by having the ex berate me by text on my intentions of getting into it with his skank at a funeral( of which I had none) which was followed up by him telling me we were only going to talk about PB and I should get my own cell plan.

This plan of his is actually going good for me. I was actually planning on getting my own cell plan when my tax refund came in and trying to stay actual friends with him was incredibly stressful. I know he is hiding some big secret from me and I don't care. If and when the bomb drops so be it, but I no longer care who I talk to and what he thinks about it. I like just saying, "I have nothing for you." when one of us is done talking to PB. I can almost laugh when I see the skank at work because she is thinks she is making me miserable and frankly I've let go. No, I will never have a conversation with her until I get an apology, but I feel I am better off now.

Anyhoo, I am straddling the fence on whether or not to explore internet dating. Frankly the pool I am in is less than stellar and I am not in my twenties living at the bar anymore. Yet, I don't know if the internet is the way to go either and of course I tossed the magazine that has some different options than match and eharm.

PB seems to be doing well in school. It is great fun for me seeing her learning to read. She does make up a lot of words, but I still love it. We have conferences this month so we'll find out more. I put her in skating since she said she wanted to play hockey and then she saw the girls in skirts and wants to figure skate. For now she  just walks, falls, and gets back up. I will probably try it again when they offer it. 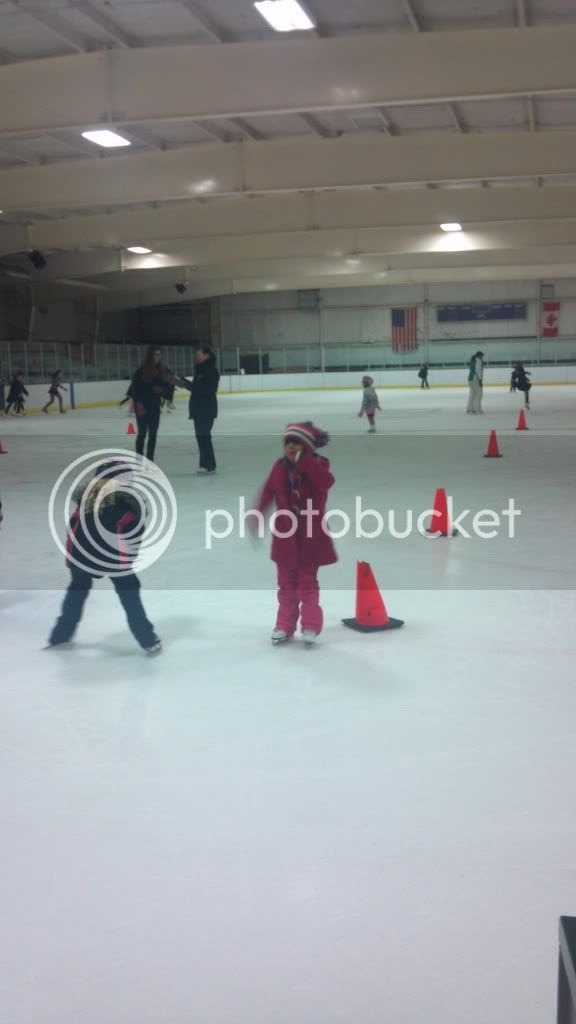 I've been trying to get her back in swim, but parks and rec fills in a nanosecond, so I'm hoping to get her in the end of March. After which T-ball will start.

I'm looking at buying a house. I met with an agent at an open house at this little house that I've had my eye on. He sounded pretty promising until he said I have to get the loan for the ex's hunting land off my credit to qualify for a loan. I have been trying to get off the house and land titles since the divorce. I only have my name on the land loan which is better than both that and the house mortgage. I don't know why he is dragging his feet on this and now with our friend dying the land might be tied up longer. He did say he'd work on in this week. I so hope he does, since buying would save me almost $200 a month. The house I'm eyeing up is pretty small, but really might be a tad bigger than what I'm in now and it would be mine. It is in total old lady mode, but looking past the stuff it has potential.
Posted by Robyn at 7:10 PM 2 comments:

Don't You Forget About Me

Since my life has become consumed with Pintrest and stalking  chatting on Facebook, I have let this blog get a little dusty. Truth be told the winter blues have settled in and I need to purge a bit.

Yes, I sometimes get the winter blues and this year is no exception. Strangely they started when we were having the best weather in January ever. I mean, I ran outside in a t-shirt and capris and still got a sweat on. But, the short days, combined with missing Peanut Butter on days I don't have her and seemingly messing up the only flash of interest another person had in me since getting divorced, I have been feeling like curling up in bed and just sleeping, but I have been hauling my butt to work fighting off tears as I try to get through this. Last night I had a little mental break down and surprisingly am starting to feel better and I got my PB back today and have my days off coming Tuesday, Wednesday. So things seem to be getting a little brighter and hopefully the blues are on their way out.

Today when after PB got dropped off, she showed me what appeared to be a face make up brush. I asked what she had and she said a brush, she and brushed her face. I was like great. Now the person for whom this saying rings true for me, has worn off on my PB and she things she has to wear a ton of make up to be pretty. My biggest fear is for PB to grow up and think she has to be "pretty" to get things. But I say to myself it is just a brush and shrug it off until I see all this powder flying off of it and say, "WTF?" I ask to see the brush and it is body shimmer powder from Victoria Secrets. I about lost it, who buys that for a 5 year old? Well, the same person who took her there shopping today. Apparently they were on a little spree in Victoria's, spraying perfume and all kinds of fun stuff. Am I crazy or is spending time with a 5 year old in Victoria Secrets inappropriate? I get running in to grab an item or two. But I would never think to buy my kid something there.

Ah, such is my life.

This blog like everything else I have the best intentions of keeping up and then stuff just gets in the way. I had every intention of making or at least sending Christmas cards this year, I did get card stock cut. I may have to do a New Years card. I have had every intention of getting this house back in order, but oy, as much as I try to keep up with and organize things, things seem to pile up and my mini tornado flies through. I am  happy to say I got the bathroom clean and clean sheets on the beds. I couldn't believe I finished all my wrapping last night, I was pretty dang proud of myself, until I found a couple items I missed. I feel so pressured for Christmas and I don't know why. I have zero plans. Peanut Butter is with her dad on Christmas Eve and she doesn't come over until 10ish on Christmas day. My mom and I are supposed to do dinner or something on Christmas Eve, but nothing has been set. I am dying to get out and just hang out with some people, but I don't know what to ask people. I have also been confused about a certain someone. Out of the blue it seem this person starting talking to me and then a few messages back and forth. I don't know if it is just pure friend type talking, but I want to say just ask me out already. But knowing my luck this is just a huge misunderstanding on my part. Did I mention my dryer died, yeah, that is the kind of luck I'm talking about. I noticed the other night it ran all night on the shut off when clothes are dry mode, and they clothes were dry. Then I did laundry and crud, the clothes didn't dry. I had to wear semi wet pants to work. I've had a friend looking at it and I'm thinking I should just call it a loss and head to sears and just get another one. Well that's about it for the moment. Stay tuned for a Poland post and more ramblings from me.
Posted by Robyn at 7:13 PM 1 comment:


But now I even feel like the bottom picture when I'm running. It is as if I am running in quicksand for 4 miles every time I go out. I think I need to move on for a bit and take a break. Through the wonders of pintrest, I found a web site that has all the insanity workouts and this body needs some insanity. The mind is saying food, fat, stay warm, my body is saying eek I am not fitting into my pants. I need some intensity back I need to not be able to walk the next day and quite frankly just running isn't cutting it. I need my ass kicked. I did Jackie Warner  Xtreme Timesaver the other day and crap, it was hard. But I actually felt like I accomplished something for a hot minute.
Posted by Robyn at 7:08 PM 3 comments:

I was supposed to blog all month?

Yeah, that went well.
Time for a little catch up.

I have now come to dislike buying shoes for Peanut Butter. I bought a pair at Target, I swear a couple weeks ago and J brought them over today when he dropped PB off and the strap had ripped off. I went to 4 stores to replace the gym shoes. PB has to wear gym shoes everyday but Tuesday to school, so buying cute shoes is a waste since she can't/won't wear them to school. I found a pair I liked at shopko, but they were brown and I wanted the black in that style. Fleet Farm had nothing, I was afraid anything I bought at wally world would rip right away like the Target pair, so I found a pair at Kohls. They aren't my favorite because, well they are gym shoes, but I did have a 15% off coupon so I bought them. And can I just say, Sketchers, I despise you, my PB fawns over your Twinkle Toes and I just cringe at the 44 dollar on sale price tag. $44 for a pair of shoes my kid will be lucky to wear 6 months. I was praying there was a pair in her size on clearance, but alas they were all 2 sizes to big.
Posted by Robyn at 7:32 PM 1 comment:

Things I am happy about this week: